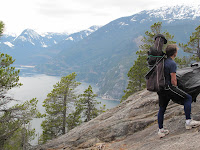 My band and I have slowly been plugging away at our 9 track album, for the last 2 years. Greg Monforton, our talented bass player, piano player, guitar player, has been producing and recording each of our varied tracks, which makes for a longer process. But this also means that we've had time to pour extra cups of love into it, and finally we're close to our baby bird leaving the nest. She's flown away for mixing, and we're so very excited for you to hear her beautiful chirps and tweets.
It's often difficult to keep our momentum because the band has other hobbies, which includes acting, nannying, sound production, yogaing, other band jamming, etc. However lately we've been plugging away nicely. We still have a long way to go, but I've always had faith we'd mature beautifully only when fully ready, not to be pushed by outside forces.
Recently we climbed the Chief, in Squamish. Reaching 2,000ft, at the top of the 1st peak, we recorded "The Jesus Song", for the Peak Performance Project contest. Greg proposed this idea almost a year ago. I remember forcing a smile, and saying, " Yah... that'd be cool." Inside I was of course thinking of the work it'd take, and quickly ruled it out within milliseconds.
But one thing you should know about Greg is that he gets shit done. He spent time in the army and hangs on very tightly to that lifestyle. As much as we joke about being under his strict colonel hand, his ways have definitely maintained our momentum.
Actually the 2hr+ hike was easier then we thought, thanks to our wonderful volunteers. To be honest I think my trek was the most difficult. I carried the bells, which look like a heavy, overly large and awkward suitcase. Because the climb was so steep, every step required a bicep curl of that jingling jackass.
Half way up we ran into hikers who worked for The Georgia Straight newspaper. Curious as to why we were lugging guitars, mics, stands, and a DOUBLE BASE, we stopped for a little interview and video shoot, which later showed up on their site. The rest of the hike we were shaking our heads at the publicity luck we had.
At the top I couldn't help but thank Greg over and over, for seeing his insane vision through. This was my first time at the top. I felt a bit sick to my stomach at the height, but marveled at the beauty that surrounded me. The snow capped mountains, lake and tiny town below looked like a painting, and I kept wanting to reach out a grab a handful of it all.
I think the toughest part of this whole journey was fighting chattering teeth and numb fingers, during the hour shoot. IT WAS FREEZING!!!!!!!!!!! I kept praying that we didn't look miserable through the lens. I don't think we'd re-schedule a re-shoot for blue lips.
After 2 weeks of editing, by director Mike Jackson, the video is out and we actually look quite peppy, thank goodness:)
Take a look, and stay tuned for the release of 4 Years Apart, due out early July, with a CD release party to follow!
Enjoy...xo
www.vimeo.com/22859733
myspace.com/caseclosedcanada